In stress urinary incontinence, the symptom is unwanted urine leakage during physical exertion, or stress on the pelvic floor. During activities such as jumping, laughing, sneezing, or lifting heavy objects, the internal pressure in the abdomen increases. As an antagonist, the pelvic floor must be sufficiently strong to hold the organs in the lower abdomen in their place, in our discussion in particular support the urethra in such a way that it can ensure the closure of the bladder. If the urethra and possibly also the bladder sinks below a certain level, it can no longer stop the urine and at least splashes come out. The amount of urine leakage required to embarrass or at least disturb the respective woman varies greatly from person to person. In any case, the basis is the loss of elasticity of the pelvic floor and thus a decrease in the occlusion pressure of the urethra (see Fig. 1). 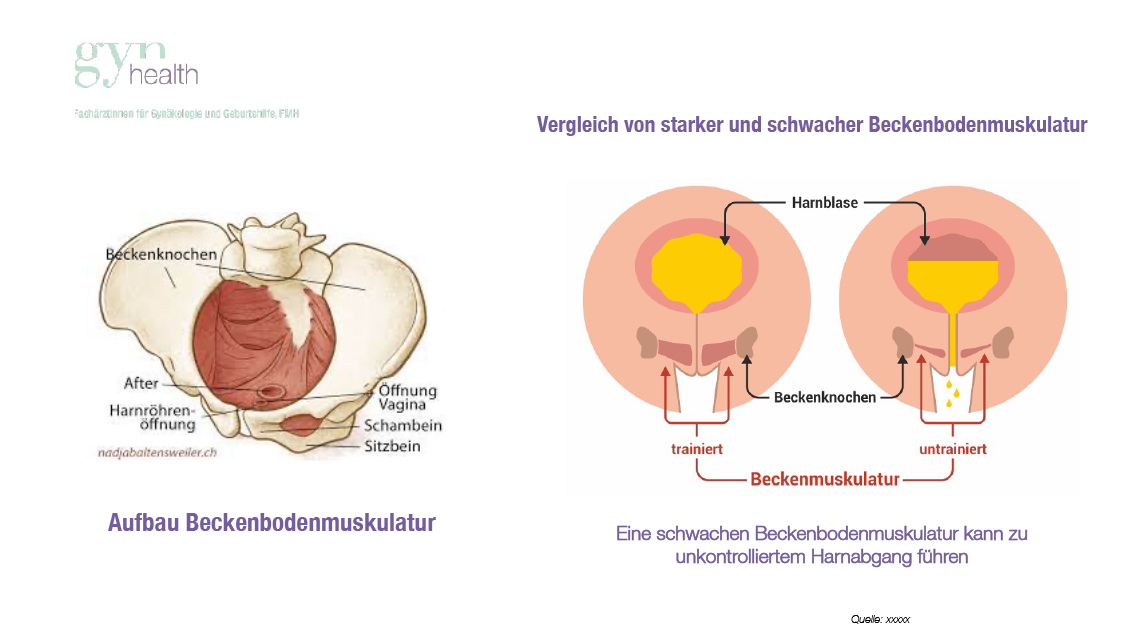 The other form, the irritable bladder, has its origin in the control of the bladder sensation and the corresponding reaction of the bladder muscle. With an undisturbed functioning of our bladder, it should fill up to a certain extent without us feeling this, from a certain volume (about 300ml), the bladder should give us the stimulus to visit a toilet until we have found it, but the muscle of the bladder should still relax and the closing muscle at the transition of the bladder to the urethra should be tense. All of this usually happens without our conscious involvement. Once at the toilet, the sphincter muscle of the urethra relaxes, the muscle in the bladder wall contracts, and thus the bladder empties. This function is also not consciously controlled by us (in contrast to, for example, the leg or arm muscles). In the case of the urge bladder, this system is confused: the bladder gives the signal to fill too early, the muscles of the bladder wall partially contract during the filling process, sometimes it comes to unwanted loss of urine, sometimes it leads to limited quality of life, since the affected woman must constantly have access to a toilet.

It has been already explained above that the two forms of bladder weakness must be approached therapeutically completely differently. In stress urinary incontinence, it is important to support the organs and especially the urethra again. This can be done by pelvic floor training (we like to work together with trained physiotherapists), tightening the vaginal wall by laser (e.g. femilift), by aids such as pessaries or by surgical intervention. The best course of action must be discussed in detail, whereby it should be said that pelvic floor training is always helpful, but it is shown in surveys that even affected women only do pelvic floor exercises consistently, for a longer period of time in about 30% of cases.

In the irritable bladder, the therapeutic focus is on a «re-education» of the bladder sensation. The first step is to recognize the situation. If the affected patient becomes objectively aware of her situation on the basis of e.g. a micturition protocol (see Fig. 2), this is often the first step. This is followed by instructions from the physiotherapist and nerve stimulation using aids. Medication can also be used. 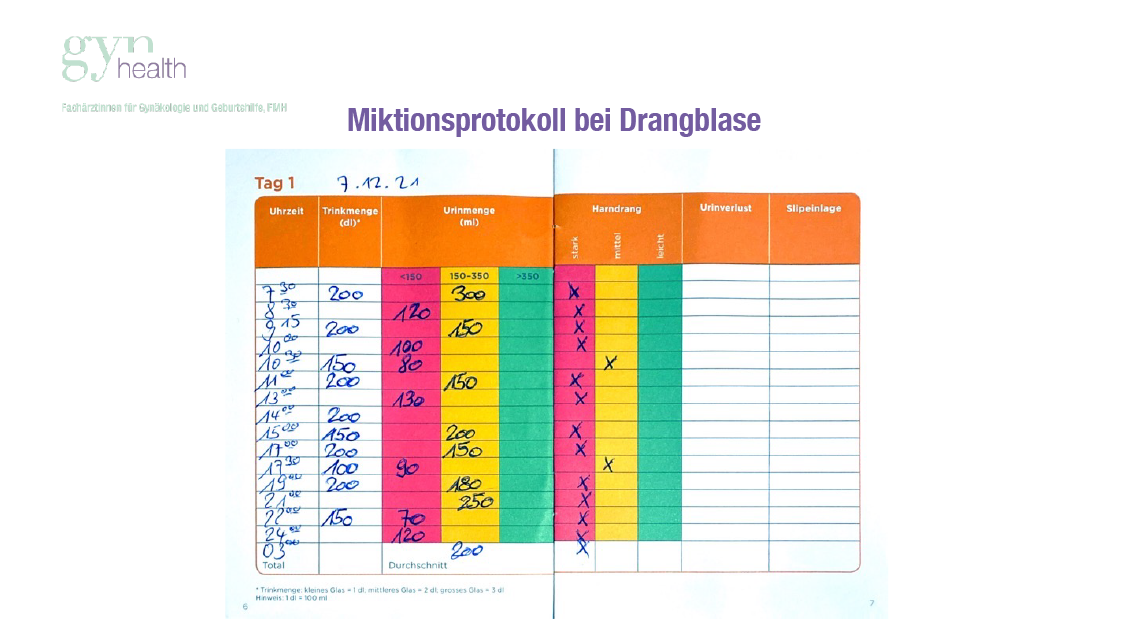 However, the situation is often not as clear as described above, there are often mixed forms of the two types of bladder weakness. The most important tool for assessing the situation is the anamnesis, followed by the gynecological examination. A urodynamic examination can then objectify the bladder capacity and the weak points of the urethra, so the therapy plan can be determined individually.